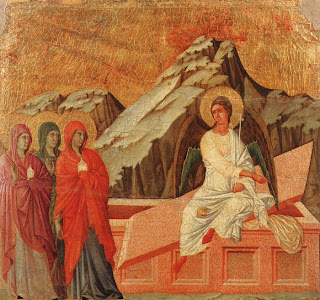 The gospel is taken from the Gospel according to St. Matthew:

As it began to dawn towards the first day of the week came Mary Magdalene and the other Mary to see the sepulcher. And, behold, there was a great earthquake, for the Angel of the Lord descended from heaven, and came and rolled back the stone from the door and sat upon it. His countenance was like lightning, and his raiment white as snow, and for fear of him the keepers did shake, and became as dead men. And the Angel said unto the women: Fear not ye, for I know that ye seek Jesus, who was crucified. Why seek ye the living among the dead? He is not here; He has risen, as He said. Come, see the place where the Lord lay. And go quickly and tell His disciples that he is risen from the dead. And they departed quickly from the sepulcher with fear and great joy, and did run to bring His disciples word. And as they went to tell His disciples, behold, Jesus met them, saying: All hail. And they came and took Him by the feet, and worshipped Him. http://www.gnosis.org/ecclesia/lect045.htm

“The Savior swallowed up death - (of this) you are not reckoned as being ignorant - for he put aside the world which is perishing. He transformed himself into an imperishable Aeon and raised himself up, having swallowed the visible by the invisible, and he gave us the way of our immortality. Then, indeed, as the Apostle said, "We suffered with him, and we arose with him, and we went to heaven with him". Now if we are manifest in this world wearing him, we are that one`s beams, and we are embraced by him until our setting, that is to say, our death in this life. We are drawn to heaven by him, like beams by the sun, not being restrained by anything. This is the spiritual resurrection which swallows up the psychic in the same way as the fleshly. “ The Treatise on the Resurrection, The Nag Hammadi Library http://www.gnosis.org/naghamm/res.html

“What great confidence at the hour of death shall be his who is not attached to this world by any affection. But the sickly soul does not know what it is to have a heart thus separated from all things, nor does the natural man know the liberty of the spiritual man. Yet, if he truly wishes to be spiritual, he must renounce both strangers and friends, and must beware of no one more than himself.”

“…Grace is a supernatural light, a certain special gift of God, the proper mark of the elect and the pledge of everlasting salvation. It raises man up from earthly things to love the things of heaven. It makes a spiritual man of a carnal one. The more, then, nature is held in check and conquered, the more grace is given. Every day the interior man is reformed by new visitations according to the image of God.”

Thomas a Kempis, The Imitation of Christ http://www.leaderu.com/cyber/books/imitation/imb3c51-59.html

and The Chapel of Saints Serge and Bacchus Blog at:

there is gnosis and then there's gnosis

France-Spiritualités: To illustrate your idea, we can recall that many leading esotericists and occultists belonged to one or another of the branches of the Gnostic Church. We'll simply cite, among the best-known, Papus and many of those who moved in his entourage, as well as, closer to our time, Robert Ambelain. But the list is quite long.

Serge Caillet: Indeed, the list is long! Jules Doinel, the founder of the first Gnostic Church–from which come all of today's gnostic churches–had dreamed of a church which would give back to Christianity its gnostic dimension. But there is gnosis and then there's gnosis. Let's not confuse the very holy gnosis which, as Clement of Alexandria said, does not oppose faith but perfects it, with the "gnosis whose name is a lie" denounced by Saint Irenaeus in his treatise against heresies in the 2nd century. Some of today's gnostic chapels, which I refuse to qualify as churches, have committed themselves to this latter path, along the lines of Theodor Reuss and Aleister Crowley, by seizing the title of gnostic church and pretending to possess the apostolic filiation, which could never–thank God!–be transmitted in this way.
Among the occultists who have maintained Doinel's heritage, one must cite at least Jean Bricaud (1881-1934), Constant Chevillon (1880-1944), and, as you said, Robert Ambelain, who were all patriarchs of the Gnostic Church. Doinel's Church did not possess the apostolic filiation, but it was the wish of Providence that his successors should receive it through a line which passes through l'abbé Julio (the Abbot Julio: Julien-Ernest Houssay, 1844-1912). So, we can ask ourselves what the Martinists gathered around Papus, then around his successors at the head of the Martinist Order, were looking for. Wasn't it the one, undivided Church, faithful to the Tradition of the Apostles and the Fathers of the Church, and possessor and dispenser of the gnosis which Clement of Alexandria speaks of? Now, since its origin, this Church has remained alive in the East, after having disappeared in the West in the Middle Ages, to the advantage of Roman Catholicism. You will have understood that I'm talking about the Orthodox Church, whose providential return in the West allows Martinists today to once again find an authentic ecclesiastical practice, in parallel with those who follow the practice of the few rare Gnostic Churches worthy of this name, where the faithful are often hardly more numerous than the priests.

Retrieved from: www.france-spiritualites.fr/interview-serge-caillet-martinism-today.htm
Posted by Rev. Donna at 5:18 PM No comments:

The Gnossiennes continue in the minimalist style of the Gymnopédies but add ornaments that give the pieces a destinctly oriental feel. Although the pieces are obviously composed in a 4/4 time signature, Satie did not indicate it in the score. He also omitted barlines, leaving one big “bar” for the entire piece. This gives the impression of great freedom for the pianist. The comments written above the score, like ‘Du bout de la pensée’ (from the tip of the thought) and ‘Postulez en vous mme’ (wonder about yourself) also give much room for interpretation. This has proven to be true since there are few pieces in piano literature that have been interpretated in such diverse ways as the Gnossiennes.

The name ‘Gnossiennes’ can be explained in multiple ways. The ancient Greek word for ‘knowledge’ is ‘gnosis’. Gnosticism was the name of a religious-philosophical belief which has its origins in Greek philosophy as well as early Christian and Jewish Apocalyptic thoughts. In this belief ‘Gnosis’ stands for ‘True knowledge’, which is supposed to lead man to true emancipation. Gnosticism also played a great role in the beliefs of Joséphin Péladan’s (1859-1918) ‘Rose et croix’ sect. Satie’s collaboration with Péladan led him to take an interest in partly-heretical views. It is possible that the title of these works is an hommage to gnosticism.

The most common explanation however is that the title refers to the ritual dances performed by the inhabitants of the island of Crete, with its capitol city Knossos, famous in Greek mythology for the story of its labyrinth, Theseus and the minotaur. In 1890 Crete was in the news because of archeological excavations. Other works by Satie from the same period were named after dances as well. Namely the ‘Sarabande’, a dance which was first introduced in Portugal in 1586 and the ‘Gymnopédie’ which has its origins in ancient Sparta. Even so, it is very unlikely that Satie, a member of the ‘Rose et croix’ from 1891 to 1892, was unaware of the gnosticism relation when the second Gnossienne was first publicly performed in 1893.

In 1967 french composer Robert Caby (1905-1992) revealed many of Satie’s posthumous and often untitled works, taken from sketchbooks and manuscripts. He named three of these pieces Gnossienne. These became Gnossienne 4, 5 and 6 respectively. The piece known as the fourth Gnossienne was composed in 1891, the fifth in 1889 and the sixth in 1897. These pieces were first published in 1968 by ed. Salabert.

Free Downloads of his music in MP3

Philo of Alexandria Blog: Taught by God
Posted by Rev. Donna at 2:24 PM No comments:

Philo of Alexandria Blog: Revelation of the name JHWH

Philo of Alexandria Blog: Revelation of the name JHWH
Posted by Rev. Donna at 1:59 PM No comments:

Philo of Alexandria Blog: The Septuagint in Philo

Philo of Alexandria Blog: The Septuagint in Philo
Posted by Rev. Donna at 1:58 PM No comments:

Joan on her own by dashinvaine 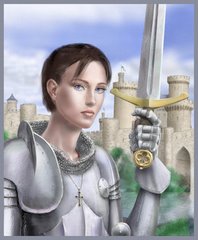